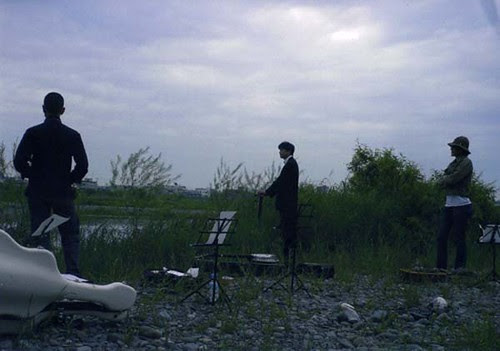 I first became interested in field recordings when I was in junior high school. It was in the middle of the audio boom, and many young people were into radio and audio devices. Also, it was popular to use synthesizers or sound effects in making music, and my friends and I were playing with recording environmental noises, like bursts of fireworks. When I tried various devices, such as making a dummy head microphone, I was surprised at the fact that the feeling of the space was captured so realistically. However, this was not so serious, and I did not think that this could be a means of expression then. In those days, I was primarily interested in painting. After entering the art university, I became interested in conceptual art and minimal art works. It was then when I first realized that recordings could be a means of expression. Although I had no musical practice in my creative background, I had been listening to various fields of music. So it can be said that I had already a sensitivity to absorb unique acoustic experiences.

It was 1994 when I first decided to release my acoustic works in public. At that time, I was more into art than now. Experimental music shops had field recordings sections then, but the works I found there were different from what I was interested in. Many of those experimental works were electronic music utilizing environmental noises such as insects and birds. The new electro-acoustic movement from France seemed to have a large influence on the field at that time. But I felt uncomfortable with their processed sounds using filtering and equalizing in recordings, since I was more attracted by a realistic feel and texture of the space. Of course it does not mean that I did not understand those musicians' intentions. If I had twisted the materials of my recordings a little bit, it could have produced some acoustic works that could come near those electronic music works. But the “space as recording object” would be distorted by a knob of the machine and would be transferred to some other context that is different from what I expect. Then it would end up in some existing genre of music, and would not be fresh to me.

What attracted my interest then was independent artists who had unique political statements on overseas labels such as Selektion in Germany, V2 in Holland and RRR in the U.S.A, and some other independent artists who put out nonsense junk cassette tape works. These two trends were very inspiring to me. The former was philosophical, and the latter had a slight sense of emptiness. To my surprise, artists from these two movements had collaborated with each other occasionally. This free spirit encouraged me, and made me believed in the possibilities of doing label activities. In the art world, there are acoustic sound works made by conceptual artists or Fluxus artists, but those works tend to be less valued as an exceptional way of expression in general, and only a few people would be interested in the artist's intentions. Rather, experimental music listeners knew about those works better. On the contrary from the art world where the artist's self-display tends to come upfront, these independent artists seemed to seek to create another network, totally different from and outside of the existing art system. That was fascinating.

The center stage of the art scene in the early 90's was multiple media art that used computers. But most of them were like poor mime performed by sensor-built devices, and almost impossible to bear. Compared with the bright center stage, the experimental scene was like a half-sunken underground. But I believed that there must be some people there who could understand my works. It was the start of my activities in this scene. 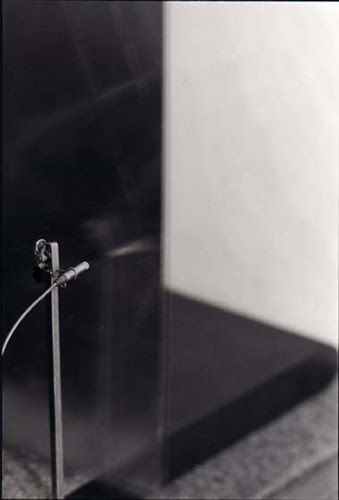 My field recordings feature the transmission of vibrations, and any location can be interesting. The question is what is happening in actual vibrations in a specific place. I picked several different locations and repeated recordings to see the depth of activity, which has slight differences every time. Any particular place forms a pattern of vibrations that is specific to the place depending on the physical condition of the space. By seeking the point for recording, I search for the nature of the place. There are various movements of waves such as resonance, interference and overtone happening everywhere. This phenomenon is very interesting.

If I use a contact microphone, I can observe the vibration transmitting inside an object. A vibration changes its behavior depending on the object that the vibration transmits. Also, vibrations are easily affected by temperature and humidity. A vibration that transmits from a solid object is not a vibration of sound or air, so we cannot listen to it. But it might be unnatural to identify a wave movement with its medium. Rather, it is better to focus on the interaction between the vibration and the sound. Sometimes I find some unknown vibration was resonant at a high level later, though I did not notice it at the place at all.

We grasp a place or a space conceptually as a map or a model. But when we observe a vibration, every space is constantly trembling. If we pay attention to the behavior of the vibration, some new phenomenon different from the conceptual map will emerge. What kind of condition is ongoing at a metal fence, on the surface of pavement, in a narrow passage or inside a pipe? Is it a secondary incident that is like a by-product of the space, or is it considered to be a nature of the space itself? This question fascinated me and drove me into recordings. By fixing the vibration on a tape, I can make a catalog of phenomena that transmit the actual space. This is my field recording works. 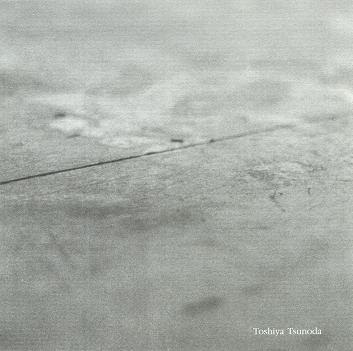 Recorded materials are reviewed when they are compiled as a CD album. It is necessary to have a certain theme that is common with each track. In my "extract from field recording archive #1", I focused on standing waves as a state of the place. In my "archive #2" that was released by Hapna, I focused on changes in a hollow space that were influenced by outside phenomena. In my "archive #3" that was released from Fringes/Intransitive, I focused on a series of solid vibrations. In my "pieces of air", I focused on a relation between aerial vibration and sound waveform. In my later works including "O Respirar da Paisagem", "Scenery of Decalcomania" and "Ridge of Undulation", I worked from a viewpoint of how to capture the place, space and time in my installations and composition works (see footnote #1). Through the series of works, my focus for recordings has changed. In my "Low Frequency Observed at Maguchi Bay" and "The Argyll Recordings", my interest has extended to conceptual direction rather than acoustic direction.

Recorded material is like a map. It is not a perfect reproduction of the information in the space. We can say that field recording is considered to be a work which crops a part from a whole complete picture. What does that mean? An incident is continuously followed by the next incident like a domino. What is a criterion to cut a moment and distinguish it from other moments? We can record sounds by setting a microphone wherever we want. Then, what should we select and what should we eliminate? In this sense, field-recording artists are similar to landscape painters. I search for some object at a certain place, and spend hours focusing on it. While continuing to make my recordings, I came to think about the meaning of choosing an object and focusing on it. Perhaps it was similar to a hunter who became more interested in shooting a bow than the prey itself.

I am currently making recordings like this: I go to a certain place and choose an object that is interesting to me. I fix a stethoscope with a small built-in air mike onto my temples. The stethoscope captures vibrations of my muscles and blood flows. Because of the nature of the air mike, environmental noises are recorded, too. If the wind blows, some wind sounds are recorded when it passes over my head. The recorded sound is like the sound that is heard when I cover my ears with my fingers. What is this? At this point, I cannot explain this well since my intuition is preceding over my understanding. Of course, some abstract issue is also involved here, other than field recordings. But at least, we can call this recording as evidence of my focusing on some object at a certain place. Recently I set a stethoscope onto another person's temples, and the two of us stood side by side and did a recording focusing on the landscape. In this way, two people create one stereo sound image. I feel that a landscape is highlighted as an object more clearly by two people than just one person, and that something more objective can emerge. The issue here can perhaps be our grasp of the image. It is about capturing one image with two inputs, which is normally what our eyes and ears do. With the space information that is sent from our two ears to our brains, we cannot distinguish the sound which one ear is hearing. There is no relation among temples, air mike and brain waves. Our brain waves do not stir the air. The position of the air mike can be set anywhere near the ears, but I feel that our temples are the best and only place for that. Is this approach just built on impulse? But I am thinking of developing this idea further. And in a way, this can be a method of field recordings with no doubt, too. 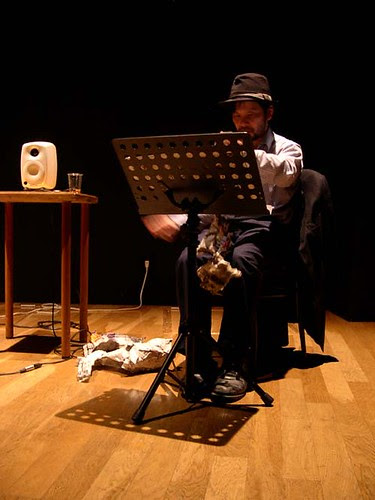 Meanwhile, what about the current experimental music scene? There are an increasing number of field recording artists and works now compared with a decade ago. Field recording seems to have definitely turned into a genre. While there are of course some wonderful artists, many of them seem to be just dealing with space information sensually, like a sort of ambient music. The knowledge about formation of the sound and recording is still ignored by many of them. There are still only a few cases that I can find that I have been interested in. 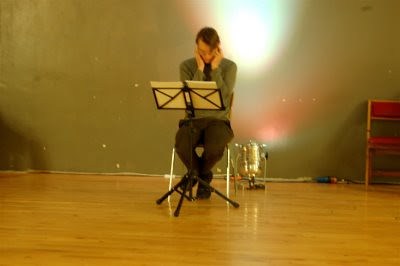 In the current experimental music scene, I am most interested in artists like Taku Sugimoto, Taku Unami and the artists from the Edition Wandelweiser label, not in field recording artists. They are trying to move their sound productions in a conceptual direction. My idea of using a stethoscope might have been born through my work with Manfred Werder. Luckily, there are some serious listeners who question the problem of consciousness in Japan, though they are only a small amount of people. They are watching our experiments calmly. And radical performances are held almost every week here, which may not be favorably accepted by overseas listeners. I have a hunch that something interesting can emerge from here. (June 2009, translation by Yuko Zama) 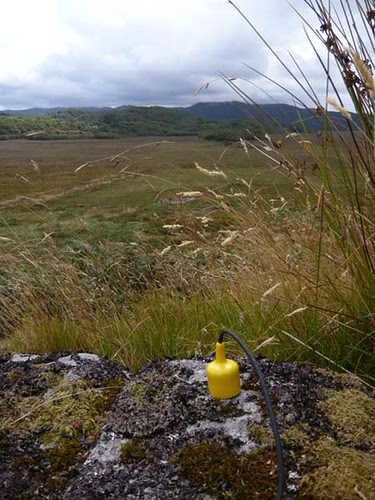 (Photos: Akiyama/Okura/Tsunoda by Reiji Hattori, AHORA by Atsushi Tominaga, Sugimoto by Yuko Zama, Werder by Richard Pinnell, Argyll by Toshiya Tsunoda)
at 5:21 AM

essential reading. thanks for the translation!

wow, fantastic, thanks for this!

Thank you for posting this. I really enjoyed reading it, especially about the stethoscope.

my russian translation of this article will appear in the next issue of "electronic music" magazine (em.tgizd.ru). thanks for the japanese translation.

Maybe it has been posted on IHM ? But just in case: http://www.thewire.co.uk/articles/5603/